The 147th Open at Carnoustie will be remembered for many things. Jordan Spieth driving the first green, Tiger Woods leading (momentarily) and, of course, Francesco Molinari’s impeccable, bogie-free performance that elevated the Italian to another level.

But perhaps the most striking thing about The Open was the course itself. Beautifully balanced between a true test and a sporting spectacle, it never stepped over the line. The rough was fair, the greens were true and the weather was everything we could have wanted. Wind played its part as did the glorious summer sun, and there was even some rain thrown in for good measure.

Entrancing, exciting and tense, it was everything we could have wished for in an Open.

For me, it represented a professional milestone. Sky used my image across its channels, but mostly in its presentation of The Open itself. At the start of every commercial break and at its conclusion, my image bookmarked the pause in proceedings. It was also used in on the Sky Golf Cart as well as a holding image on Sky’s TV guide. It’s a small thing in what has been a tumultuous week, but one for which I am proud. 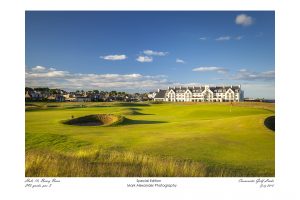 To mark the occasion, I am releasing a special edition print of the infamous 16th hole at Carnoustie – as seen during Sky’s coverage. Available in three sizes – 18×12, 30×20 and 30×12 – this iconic image captures the beauty and challenge of what many consider to be the ultimate test in Major championship golf.

For more information or to order your special edition print email:  info@markalexandergolfphotography.com