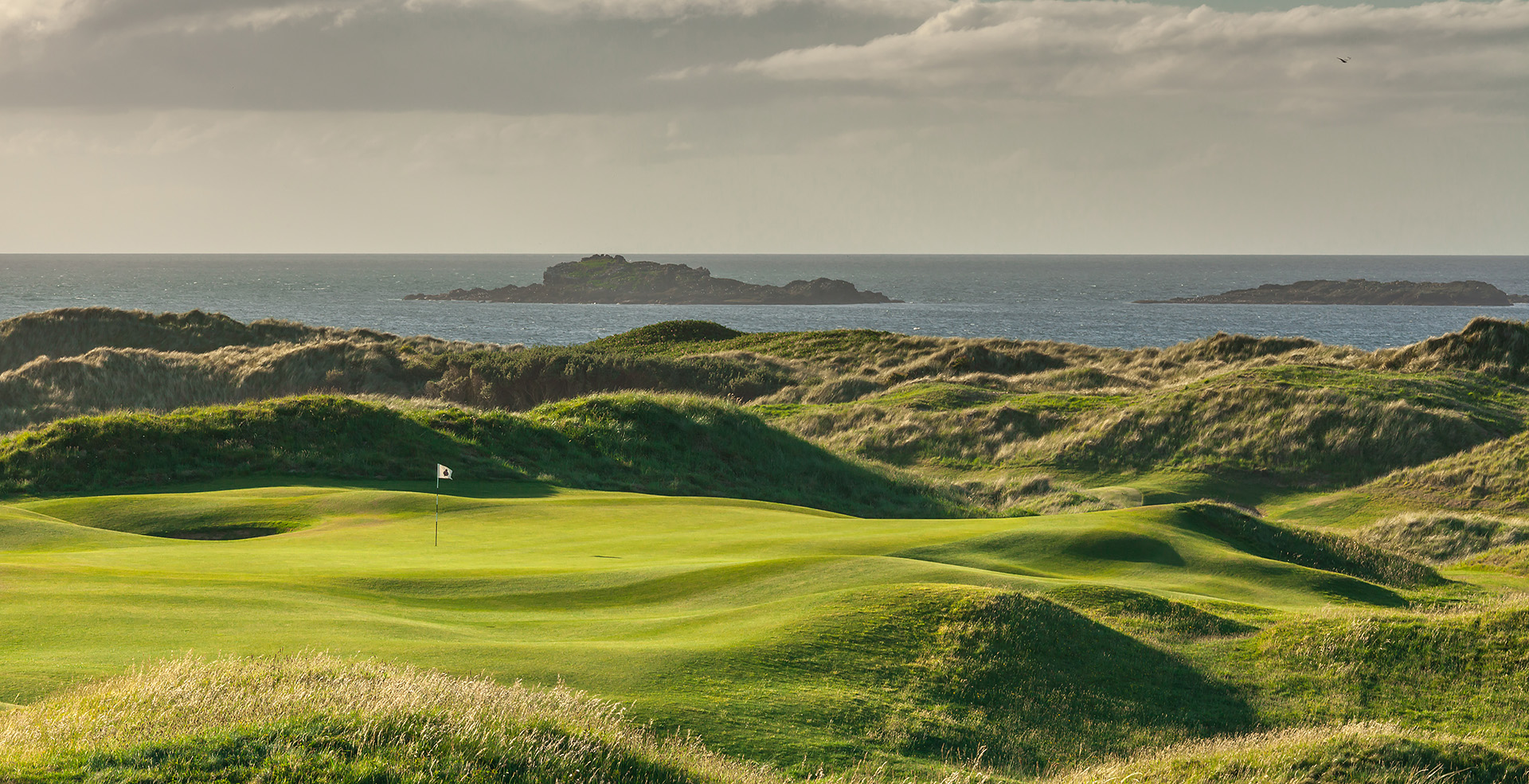 In 2012, I wrote an article about the rise of golf in Northern Ireland. It seems fitting to dust it off and have a look…

The meteoritic rise of Northern Ireland’s golfing stars has thrust the province into the limelight like never before. Mark Alexander goes back to where it all started for Ulster’s Major winners

It was on the sixth tee when it happened. Gripping on to a three iron, eyeing up a 185-yard par three into the wind, I realised this was the apex; this was what golf was all about. My fourball had just finished one of the most exhilarating holes we had ever played and the camaraderie had reached such a peak that all we could do was smile. That’s what Royal Portrush Golf Club can do to you.

For as daunting as that shot was, it was a mere trifle compared to what had come before. White Rocks, a 411-yard, downhill par four, begins with a formidable tee shot to a bunkerless fairway shaped only by the dunes that sweep towards the cliff-edge green. Hitting it in two is something that will live with you forever, so I was told.

While my golfing skills were no match for the devilishness of the Dunluce Links at Royal Portrush, it should come as no surprise to anyone that this fantastic course has been selected to host the 2012 Irish Open and next year’s Amateur Championship. In theatrical terms alone, the twists and turns of its fairways puts it in the top bracket of trophy courses.

If ever a venue deserved a regular slot on the European Tour, this is it. As it happens, the course last hosted the Irish Open in 1947 going one better four years later when it welcomed the jewel of all Majors – the Open Championship. “This has been simmering away for quite some time,” says Gary McNeill, head professional at Royal Portrush. “We’ve been working with the local government here in Northern Ireland and the European Tour has made quite a few visits to the course.”

Like most of us, McNeill could hardly contain his delight when the Portrush announcement was made despite questioning the club’s omission from the big time. “The Open Championship was here in 1951, and the players enjoyed themselves, so why didn’t they bring it back in the early 1960s?” he asks before getting to the nub of the issue. “For a long time, the political situation in Northern Ireland was why it wasn’t considered.”

Until now, there has been a reluctance to bring big tournaments to Northern Ireland, and perhaps with good reason. After all, more than 3,500 people were killed during ‘The Troubles’, among them nearly 2,000 civilians. Not surprisingly, even the Irish Open stayed away – it was last held in Northern Ireland in 1953 at Belvoir Park Golf Club.

But a lot has happened since then. The Good Friday Agreement of 1998, for instance, brought together political enemies by offering hope and optimism. On the course, Northern Ireland has taken the golfing world by storm with the achievements of Darren Clarke, Rory McIlroy and Graeme McDowell being nothing short of miraculous. But between visits to the winners’ podium, the power trio like nothing better than coming home to the relatively calm of Northern Ireland and its undiscovered courses.

“When Darren’s home, he often plays here up to three times a week. He putts and chips a lot on the short-game practice area,” says McNeill, who has had the benefit of monitoring Clarke’s progress over the years. “He’s very keen to share his ideas,” he notes.

McNeill also takes a keen in interest in Clarke’s two sons, Tyrone and Connor, who he coaches to an increasingly high level. But it was another youngster that caught McNeill’s eye when he witnessed what was to be one of the club’s most celebrated rounds – a net 65 by a 15-year-old McIlroy (playing off +4) during the North of Ireland Championship.

“It was pretty special,” he recalls. “Word came in off the course that after 10 holes he was about five or six under par. I saw him play the last three holes. What impressed me was it was a tricky day – there was a fair breeze blowing. That was the first time I had seen him play.”

On two occasions I have had the pleasure of playing the Dunluce Links. Each time the sun has warmed my back and the notorious salt-laiden gusts off the angry sea have been merciliously absent. Despite the serenity, the course easily lulled me into blunders that induced innumerable dropped shots and general embarrassment. With that in mind, McIlroy’s gross 61, in a biting wind, seems all the more impressive.

Down but not out

Despite Royal Portrush’s undoubted links credentials and his remarkable round there, McIlroy opted for another of Northern Ireland’s treasured courses for his preparations for last year’s Open Championship. With his historic US Open victory fresh in the mind, McIlroy played Royal County Down – the King of Irish Golf.

“It was his fourth round since he won at Congressional,” remembers Rory Doran, who accompanied McIlroy around Royal County Down on that day in June. “He was hitting it really nicely. He shaved the hole on 14 with a five iron from 220 yards. It was six inches from dropping. He’s one of the most down-to-earth guys you would ever meet.”

Praise indeed from the club’s assistant pro whose best knock around this remarkable course is 69. You see, if Portrush successfully combines the formidable with the spectacular, Royal County Down achieves this with even more colour and a little more spice.

In fact, Royal County Down takes links golf to another level. Regarded by many as one of the best links course anywhere, its aura attracts golfers from around the world. “It is a pure links, in the truest sense of the word,” noted Tom Watson after playing the fabled course. “It is a tremendous test of golf and the outward half especially is as fine a nine holes as I have ever played.”

Standing on the first tee, you can see what he means. The tall dunes that sweep down to the undulating fairways are extravagant and wild. They create amphitheatres in which wild tossocky faced bunkers guard smooth greens. This is truly a place of wonder, and one which epitomises links golf perfectly.

Doran’s boss, Kevan Whitson, head professional at Royal County Down, says it’s important to note that when you come here, you will be playing one of the toughest courses in the world. Not that Northern Ireland’s major-winning trio are put off by that; in fact they can’t keep away.

“Rory lives closest to here, and he loves it,” says Whitson. “When [Clarke, McIlroy and McDowell] are away, they love to get home, and when they come home, they love to come and play. They are very proud of their golf courses and they are great ambassadors with good connections to the next generation. With Northern Ireland being so small, everybody knows everybody, so the next generation feels their success.”

Asked to explain the timing of the trio’s achievements, Whitson says it came down to faith and self-determination. “There was belief,” he says plainly. “When Graeme won the US Open, that was amazing. But then Rory thought that if Graeme could do it then so could he. For Darren there was an element of thinking he should have done it before, but maybe he could do it now. That was always the difficulty, but that belief structure is there now.”

What is also apparent is the huge interest being shown in Northern Ireland which, in turn, is translating into a healthy rush of visitors. Not surprisingly, bookings are up at Royal County Down as they are at Portrush. “We’re definitely seeing the effect of Darren winning the Open Championship and Rory winning the US Open,” says McNeill. “I think you’ll see an influx into Northern Ireland over the next five years with golfers coming to investigate what’s going on over here.”

The emerging Northern Ireland golf boom was sparked by an unprecedented tally of Major wins that shone a bright light on a collection of top-drawer courses. The quality had always been there; now there was a stage on which to show it off. For Peter Kelly, club manager at Malone Golf Club in Belfast, it was a watershed moment.

“It put Northern Ireland even more on the map,” he says earnestly. “Not only do we have two of the best links courses in the world, but the golfers who didn’t realise we had those courses are now thinking about coming to Northern Ireland because of the press coverage those guys are getting. And when they come to Northern Ireland, they will be very pleasantly surprised at how many good quality golf courses we have.”

Malone is a fine example. Just five miles from the hustle and bustle of Belfast city centre, this 27-hole parkland course epitomises what Northern Ireland is all about. The quality of the place becomes all too apparent from the moment you turn into the long tree-lined driveway. The grand old country house that eventually greets you is suitably imposing but has all the modern comforts, such as a recently renovated proshop and stylish-looking bar and restaurant, that make a visit pleasurable.

The three courses themselves are reminiscent of some of the great parkland layouts of the south east of England, but with more elevation. Sweeping doglegs banked by mature trees provide the challenge, while the centre-piece – a natural trout lake – provides the beauty.

It also provides the current US Open champion with the perfect warm-up for tournaments that demand pin-point accuracy. “He’s always here two or three weeks before Wentworth,” says Kelly. “He uses it as a practice for the parkland set-up. He feels it’s the best manicured parkland course in the north.”

Asked about the success of the young Ulsterman and his cohorts, Kelly praises the grassroots network that has seen older generations supporting the next crop of players. “Rory was taken under Darren’s wing when he was young, and now Rory is taking other kids under his wing. We’re very lucky because the professionals that do well here don’t forget where they come from.”

From the rough-edge beauty of Portrush and the regal elegance of County Down to the refinement of Malone, why would they? Northern Ireland is emerging from a bitter past with an exciting future championed by three world beaters. No-one should forget the past, but increasingly it’s the future to which most of us are looking.